The first time we visited this region, we didn’t really explore much of the High Peaks region and stuck mainly to the waterfall hunting and Cranberry Mountain.  I have to admit that I was poorly prepared for that hike despite my experience on my trek in New Hampshire, but that was 2007.  This time around, I had figured out my own way of hiking and tackling the challenge in front of me.  I was ready for a spring hike up Cascade Mountain.

This was the second time my friends and I made our way to the Adirondack mountains for some spring time hiking.  This would typically coincide with Canada’s Victoria Day long weekend.  With some endurance road trip driving and decent traffic, the mountains are only about 4 or 5 hours away. 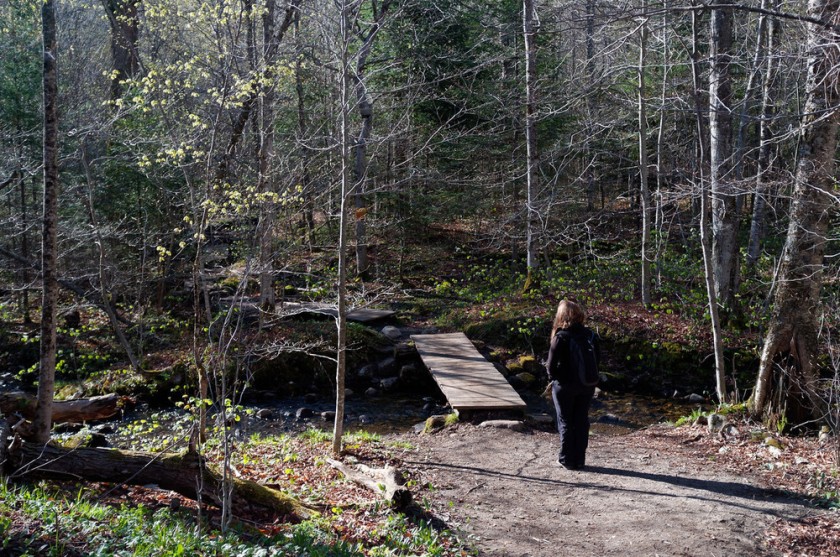 Beginning the trek, just steps away from the trailhead.

The first time we visited this region, we didn’t really explore much of the High Peaks region and stuck mainly to the waterfall hunting and Cranberry Mountain.  I have to admit that I was poorly prepared for that hike despite my experience on my trek in New Hampshire, but that was 2007.  This time around, I had figured out my own way of hiking and tackling the challenge in front of me.  I was ready for a spring hike up Cascade Mountain. 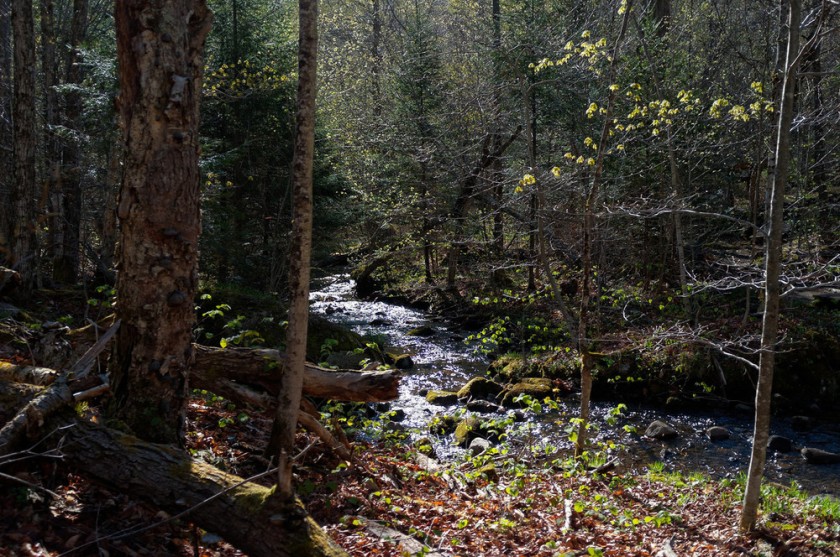 A very pretty stream runs past us as we begin the hike up Cascade mountain. 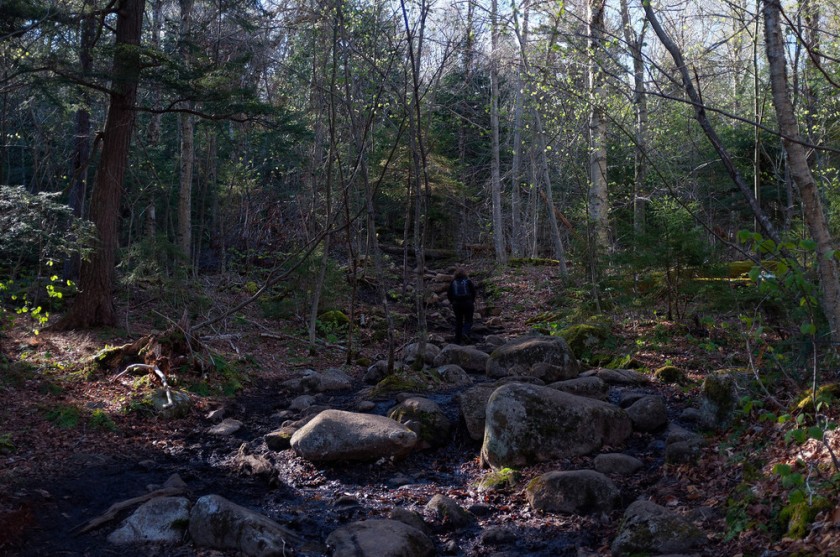 Seeing some mud, and hoping that it would be drier as we ascended.

We knew there was potential for the trail to be pretty wet.  In fact, when we hiked Cranberry Mountain — we were practically hiking up a waterfall.  Trust me, not much fun but it’s even worse if you’re carrying too much (which I have gradually unlearned!).

The trail began relatively easy and slowly introduced more rocks and large stones on the way up.  For me, it was nice that the temperature was still pretty cold at this time of year so we didn’t have to struggle with factors like humidity or a blazing sun.  The lack of flying pests was a bonus! 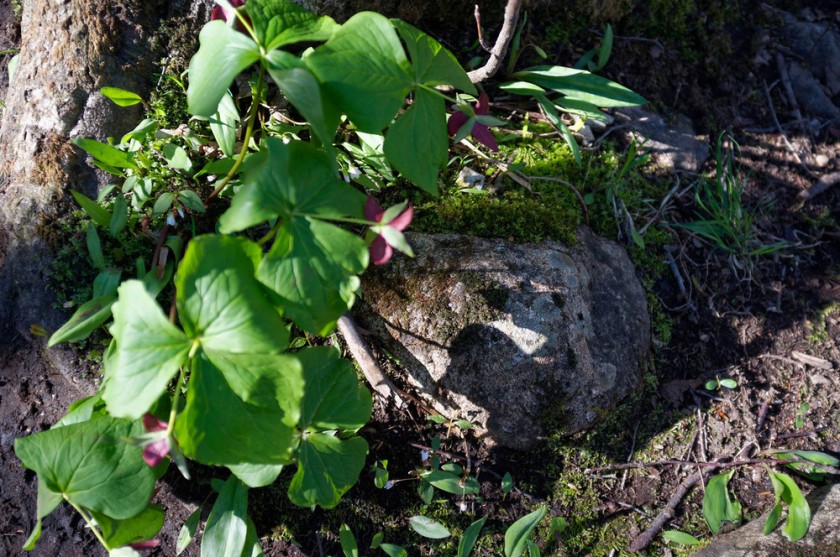 Flowers beginning to show themselves. 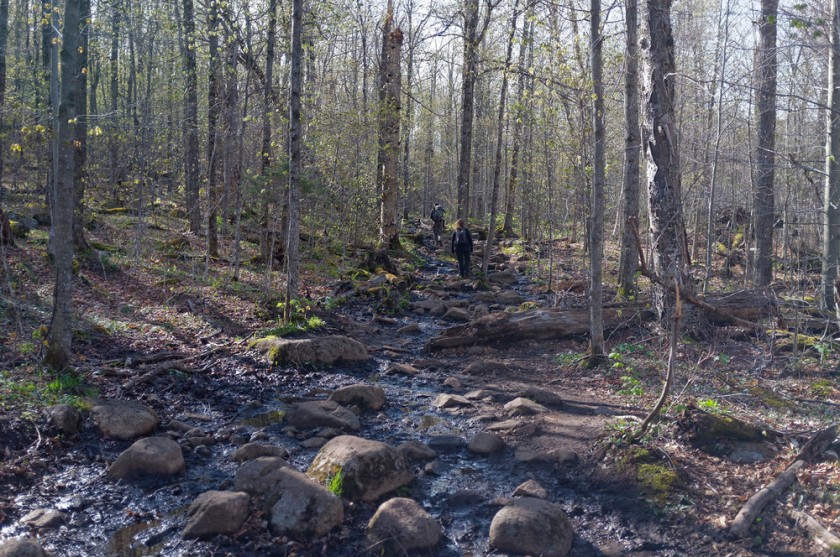 The trail started off pretty muddy as soon as we made our way up. 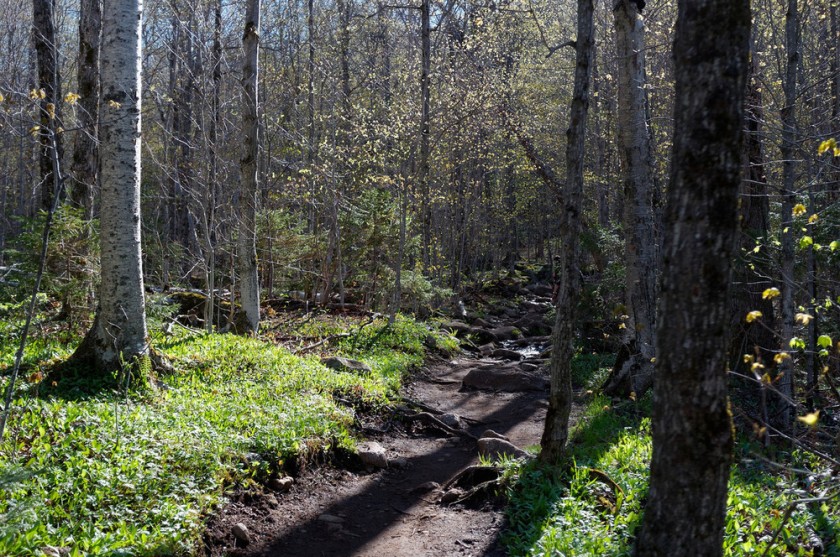 There are occasions where you just have to stop and just marvel at what mother nature is creating as an artist.  With the leaves just beginning to sprout, trees would often look like they were covered in bright speckles.

As we continued further up the trail, things began to get muddier and the terrain got more difficult.  This is often when I try to advise those who aren’t accustomed to hiking to be very careful because it is very easy to trip or sprain an ankle.  Every so often I still see people hiking up with just a pair of sneakers which just blows my mind. 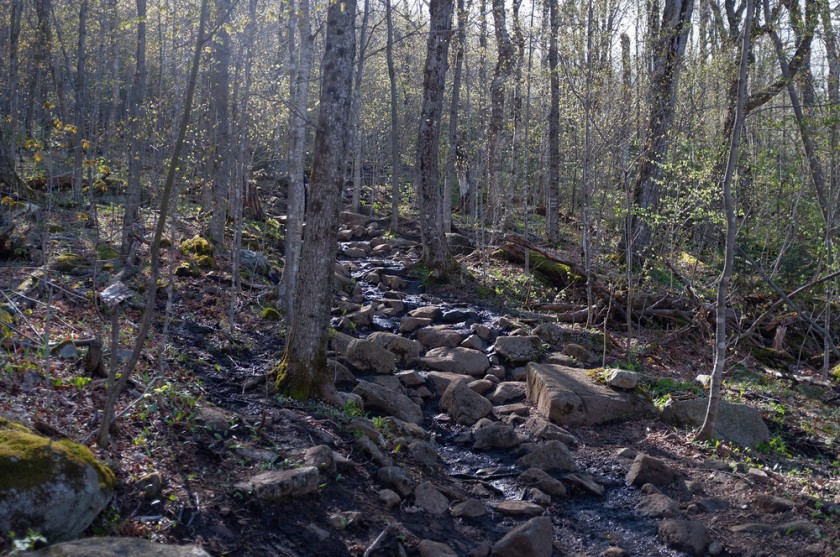 Mud and lots of large stones often makes for a challenging ascent but the spring-lit trees made for a very nice photo. 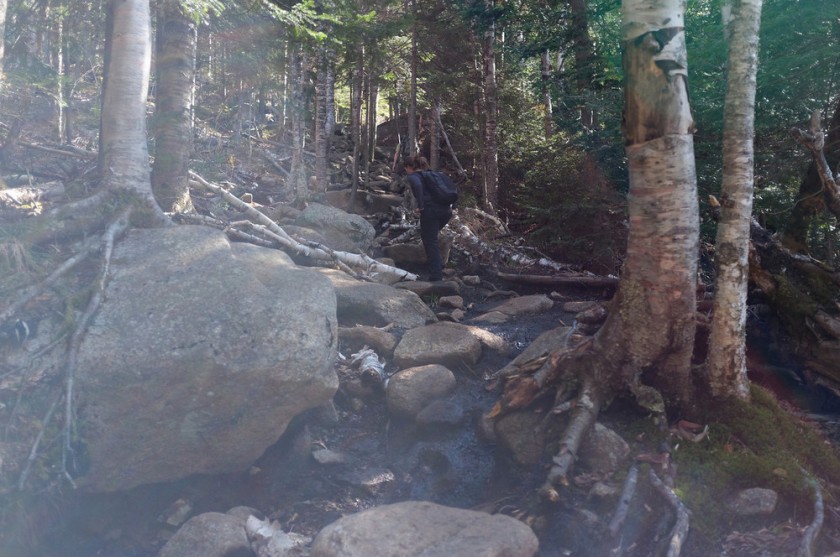 Lots of tree trunks, roots, and boulders to contend with on the ascent. 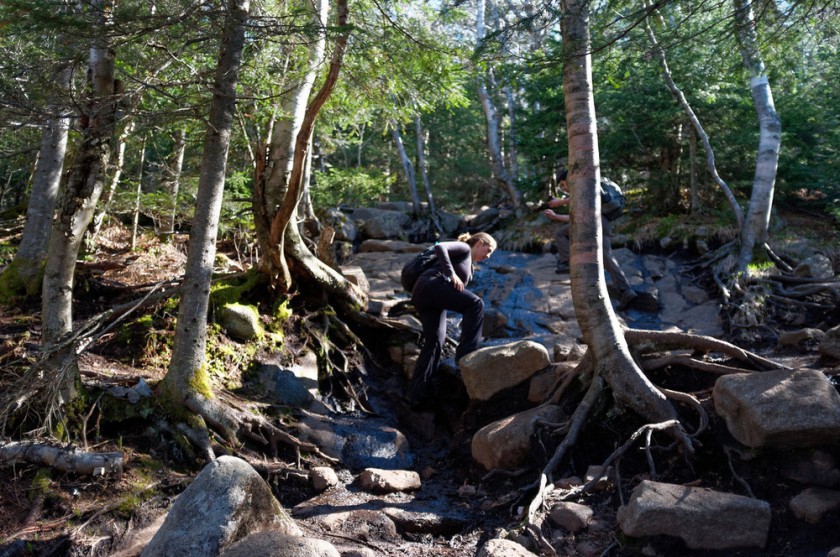 I can see there being a waterfall down this part of the trail at certain times of year.

The ascent on the trail truly begins when you start noticing yourself climbing over tree roots and boulders.  Throw in some steepness and water streaming down and it’s a pretty solid workout.  I wish I lived close by to something like this — forget the gym and climb this each day!

Despite the number of times when I want to shake my fist in the air and shout why! — I really admire those who helped build and design the trail.  Particularly as Cascade Mountain tends to receive a lot of traffic.  There are some areas where everyone really gets into a traffic jam because of the people ascending and descending.

The one thing that is vital to recognize is that everyone has their own way of climbing up or down a “tricky” section and it becomes very challenging when people begin crowding due to lack of space.  This ends up reducing the number of options that someone is able to find when ascending or descending.  In other words, if you want more options — find low traffic times like early in the morning or really off season (i.e. winter). 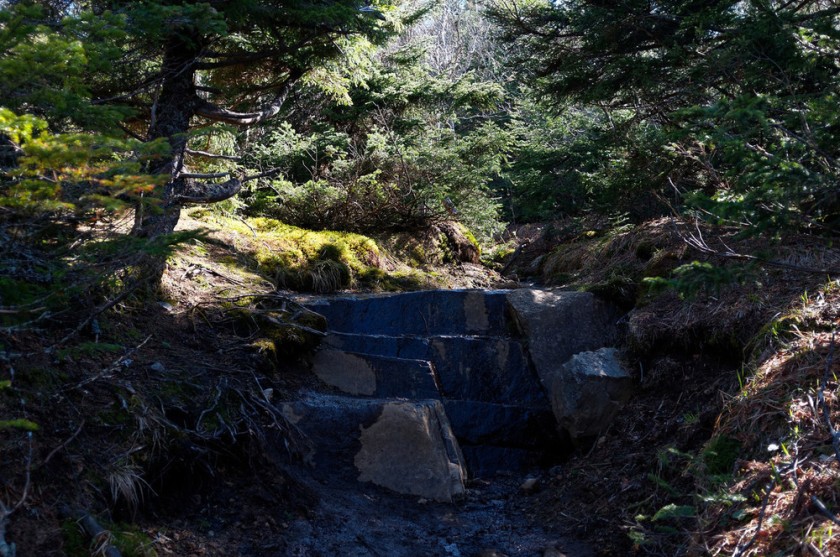 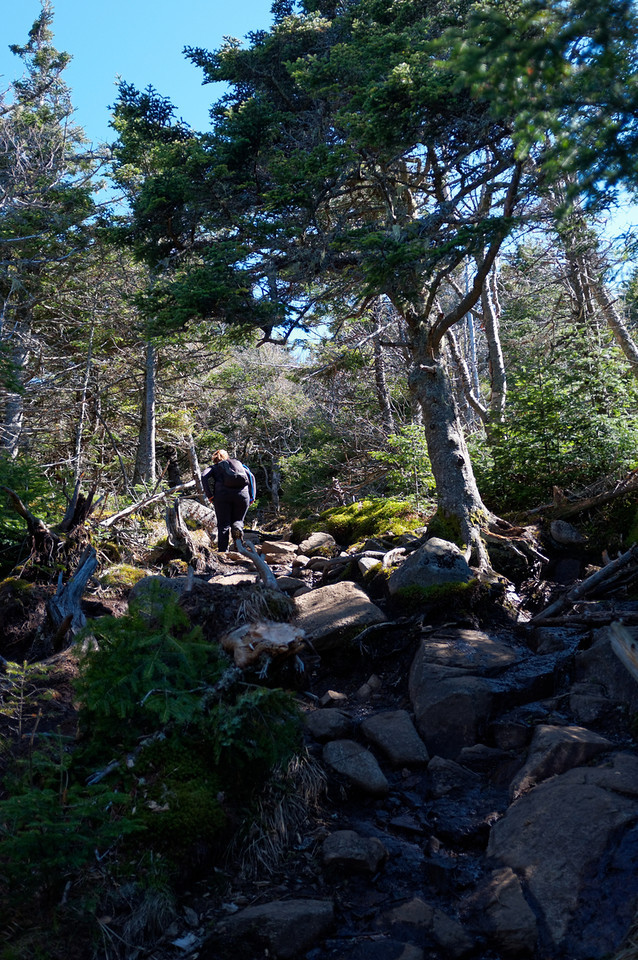 A very steep rock scramble up this part of the trail.

Often it’s not the hike up that is the major challenge for me, but the way down.  That said, ever since I’ve trained with hiking poles — the experience is a lot easier — but there are sections of the trail that hiking poles don’t necessarily play well with so one might find themselves using all for limbs on the ground or looking for alternative routes.

We were treated with a great lookout point with an opening in the trees just when we needed to take a break.  Very few people were around so this was perfect to sit back and take in the sun while the day was still early. 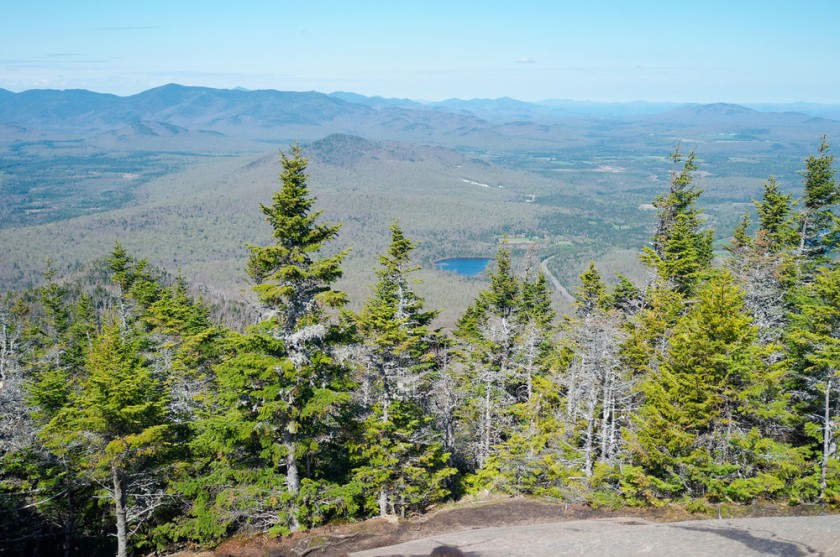 Taking a breather at this lookout point. 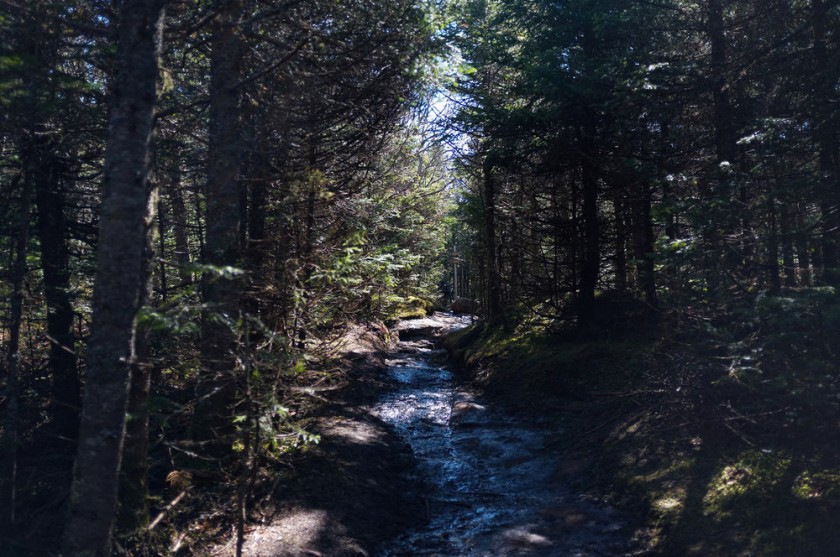 Parts of the trail almost seems like it was built to collect water and mud.  Fortunately, it was a gorgeous sunny day.

Once we continued on our way, we found that the trail almost looked like it was a trench.  This made for a really wet and muddy hike up but fortunately it wasn’t too big of a deal — last time I had to hike up the so called “waterfall” on Cranberry mountain with boots that weren’t waterproof.

The neat aspect to tackling Cascade Mountain is that there’s also the option of going after Porter Mountain within the same day.  The only thing to keep in mind is where you want to actually enjoy your lunch and I’ll get to that later. 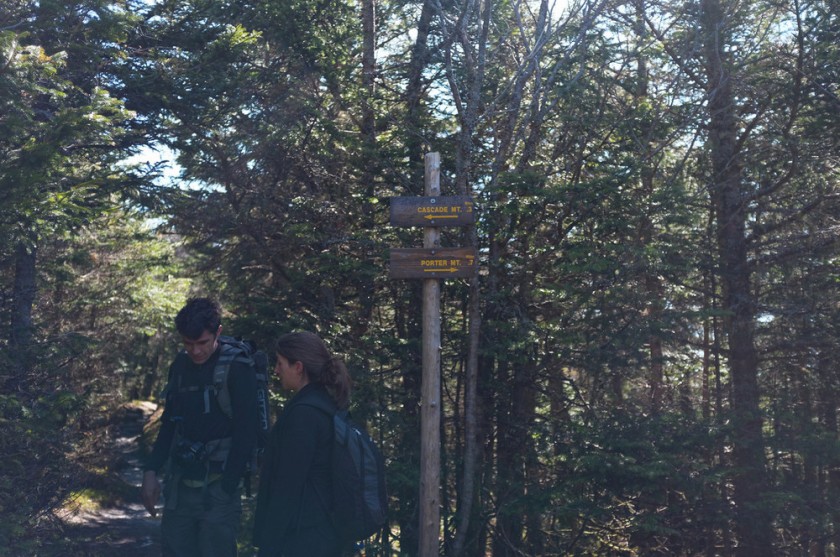 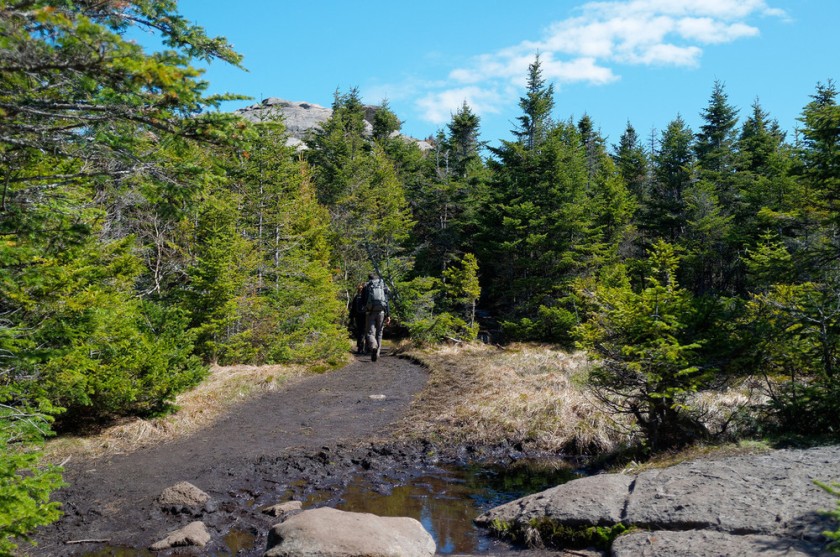 The summit is in sight, or so we think.

The funny thing about spotting the summit is that it never really is the summit that you see.  It is often just the beginning.  Nonetheless, arriving past the alpine tree line is my favourite moment when hiking up mountains.  The moment when I’m finally able to see past and above all the trees and can start walking around on the bald-faced top of a mountain — that is really the instant when I feel how big the world really is.  As you’ll see in the next few photos, this hike up just keeps going. 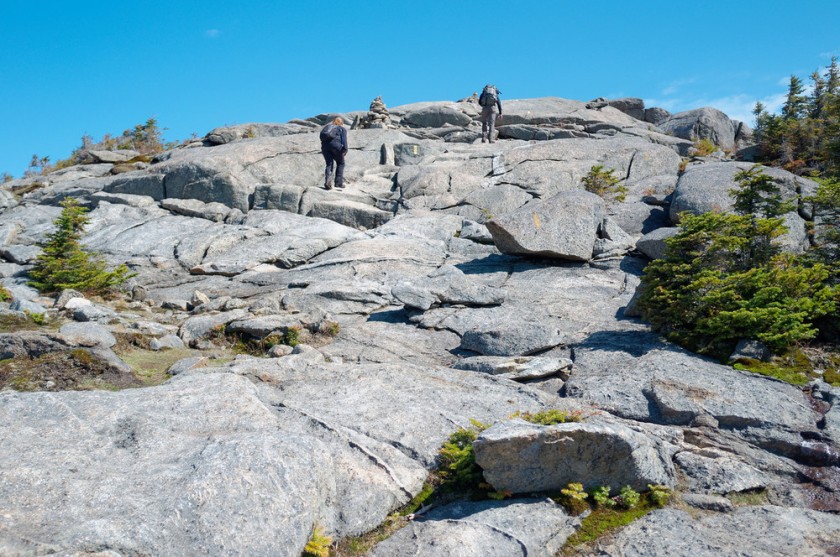 It’s steep rocky climb up, but doable on a nice day. 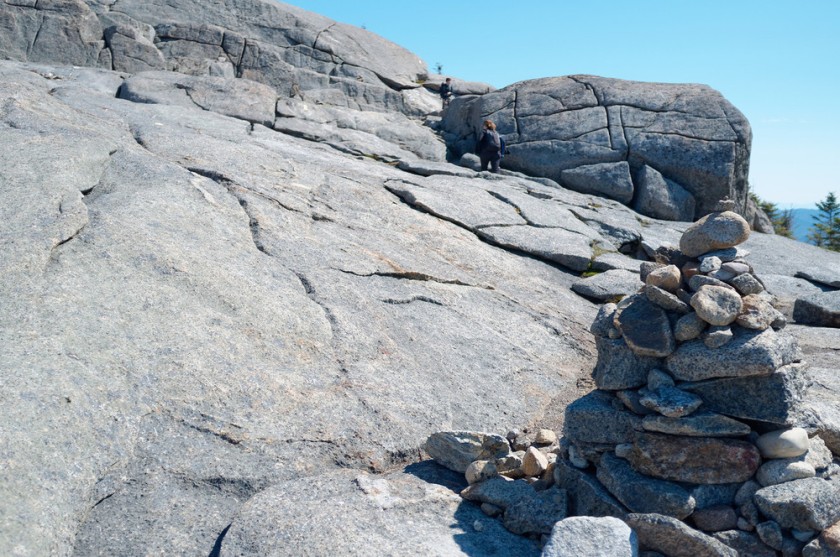 This is what replaces the painted trail marker once we get past the tree line. 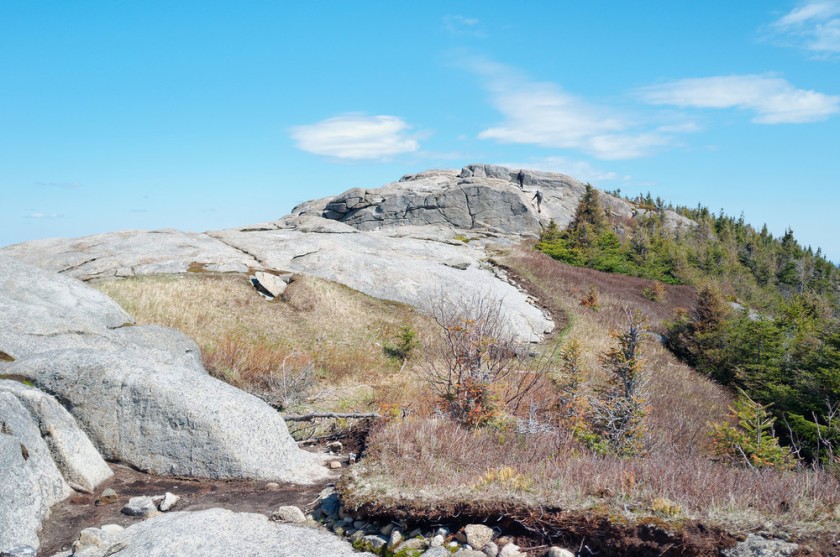 The trail continues to take us up the bald area of the mountain. 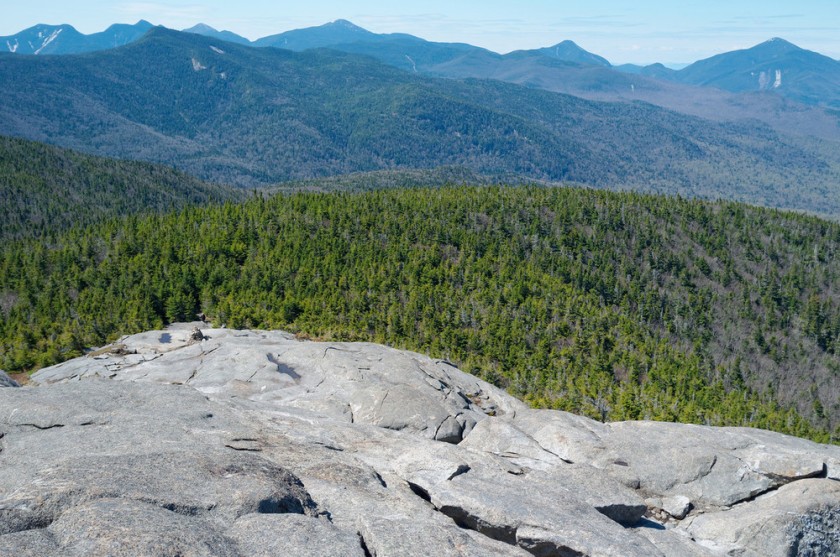 We just keep going up…this is just looking back the way we came.

As we were reaching closer to the actual summit of Cascade Mountain, we saw a couple of people reach the base of the bald-faced summit and simply turn around.  I realize the trek must have been tiring for them but it is simply such a shame to come all the way up (probably 98% or closer to completion) and not push to the end.  The view is definitely worth it. 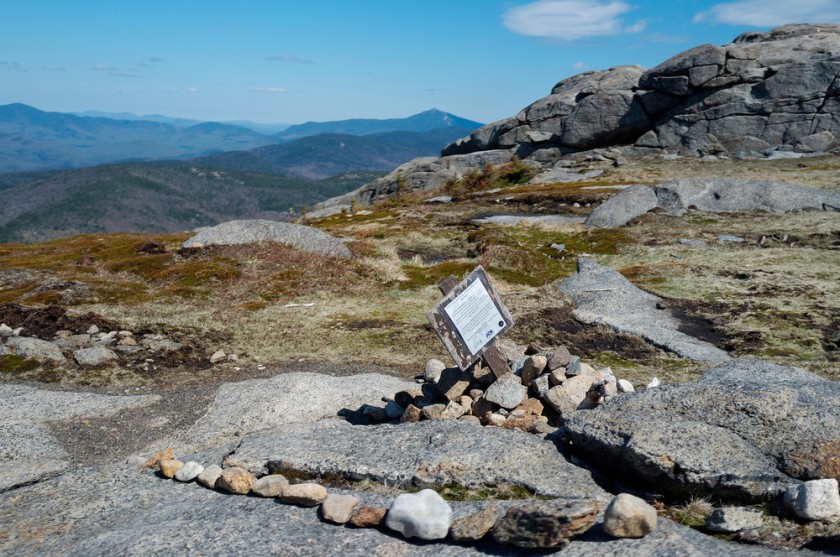 A signing asking people not to walk on the delicate flora. 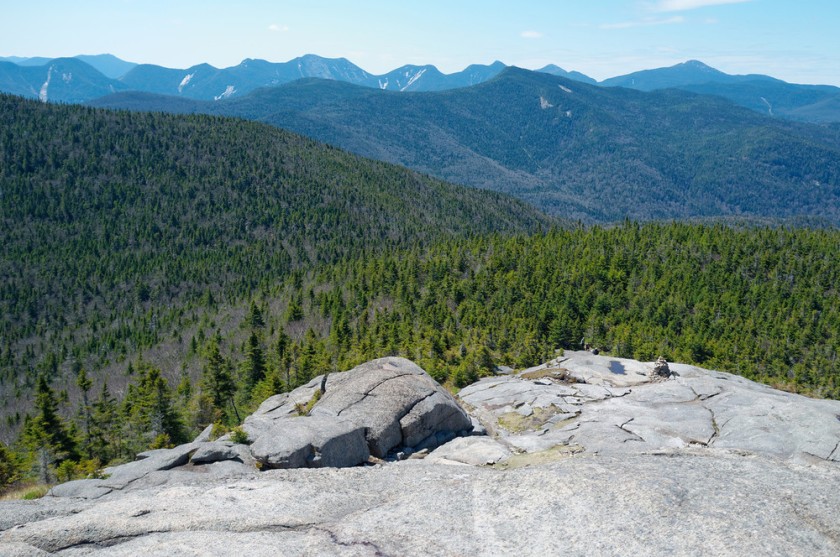 Taking a look back down the trail. 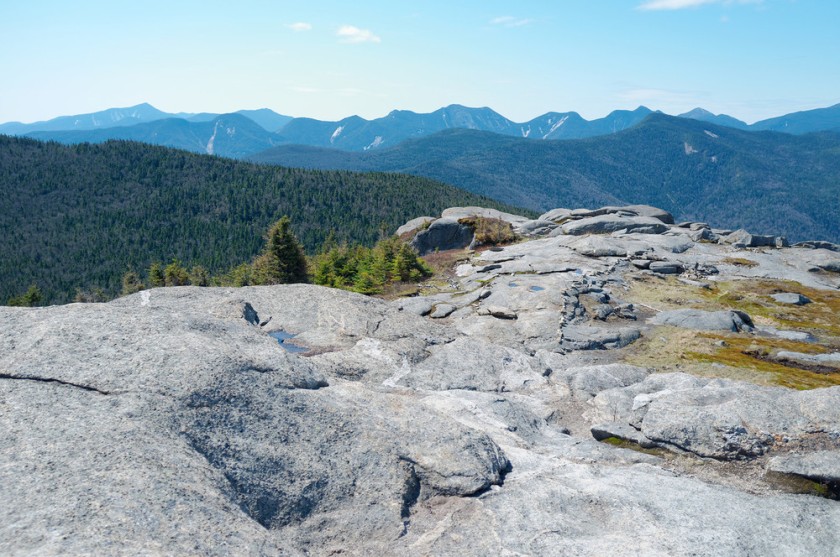 On the beautiful summit of Cascade Mountain.

Once we finally arrive at the summit, my friends and I sit down to enjoy a snack or two.  I actually wanted to eat lunch here (com’on, what a view!) but they wanted to move on to Porter Mountain after spending less than 15 minutes on the summit.  This is where you begin to realize how everyone’s priorities differ.  Nevertheless, I wanted to tackle Porter Mountain as well so I begrudgingly obliged and we trekked back down the summit and began following the trail signage that would lead us to Porter.

Unfortunately, it was even muddier than the way up Cascade and we were merely crossing from one mountain to another without a major descent.  As the day got warmer, it also got even muddier on the way down back to the parking lot as we eventually found out later. 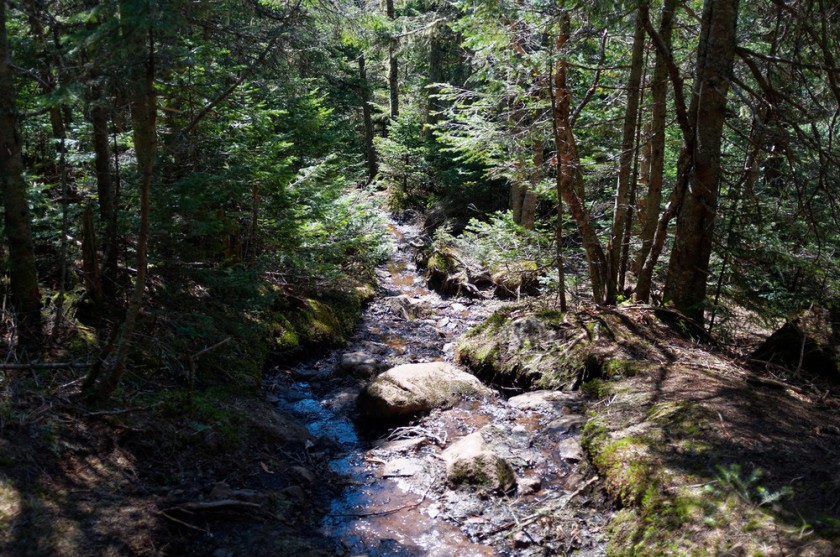 We decide to take the path towards Porter Mountain. Might as well try and summit another mountain! 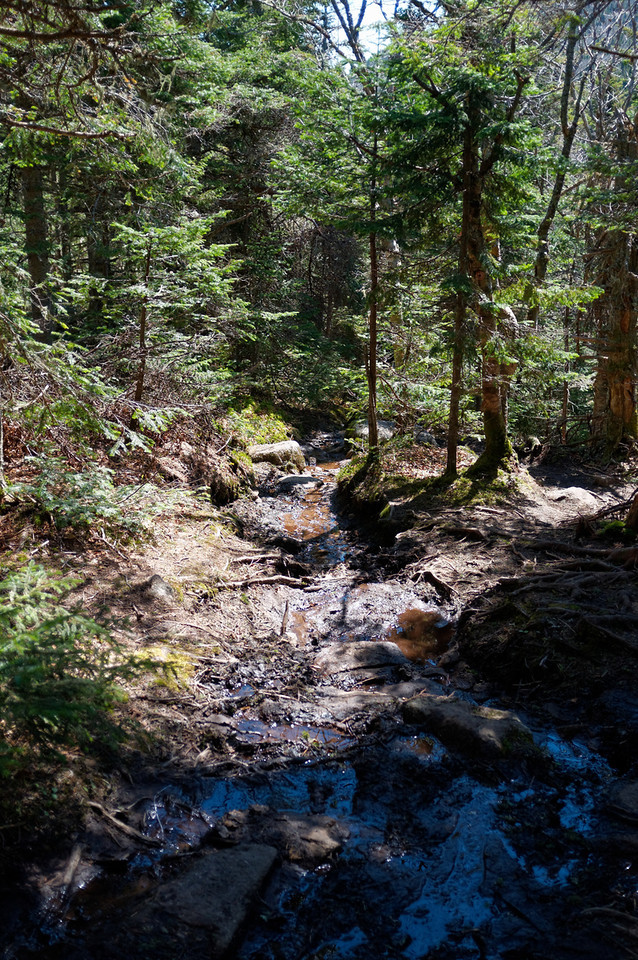 The up and down muddy path on route to Porter Mountain.

After a relatively uneventful and not-too-exciting-but-quite-muddy trek to Porter Mountain, we discovered that the summit wasn’t really open like it was on Cascade.  The small bald spot on Porter Mountain was actually quite busy with fellow hikers but we sat down and enjoyed our lunch with a slightly obstructed view.

In hindsight, as much as I liked the fact that we tackled Porter Mountain as well, I would have preferred simply enjoying more time on Cascade Mountain.  Yes, it got busier as the day went on but sometimes it’s just about quality time on a quality summit. 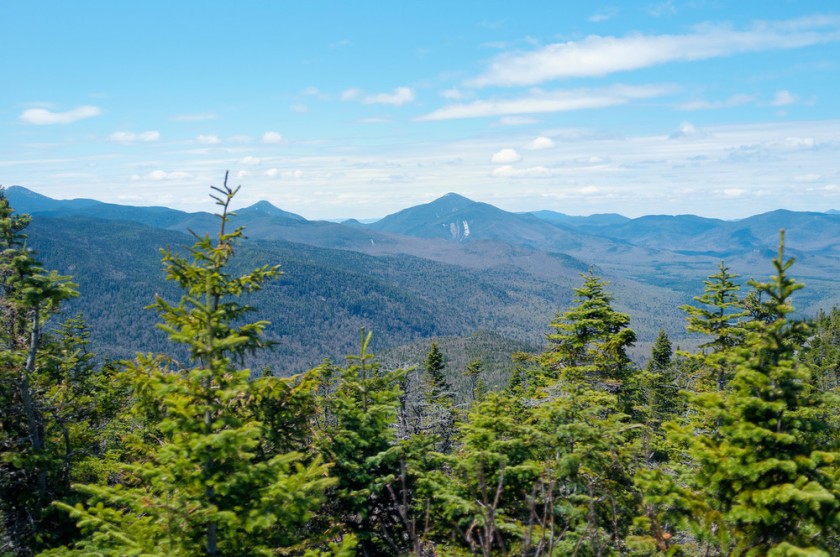 Lunch with a grand view.

After lunch, we made our way back down the trail but encountered a significant amount of traffic.  I pretty much stowed my camera back into my pack the remainder of the way back down the mountain.  It made for a much more enjoyable and easier descent.  Cascade Mountain is one of my favourites in the Adirondacks and I’d love to return in the autumn one day.

An explorer of life and data. Reluctantly philosophical. A seeker of the ultimate cookie. Another tree-friendly soul with an affinity for hiking and sketching. View all posts by Ehren Cheung